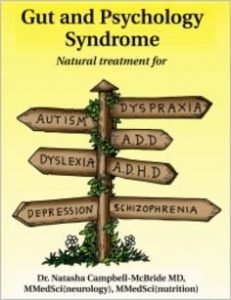 GAPS – what is it? Learn about the condition which is behind many mental and physical problems, which our children and adults suffer from, such as autism, hyperactivity and attention deficit, dyslexia, dyspraxia, depression, schizophrenia, bipolar disorder, obsessive-compulsive disorder, eating disorders and more.

Gut and Psychology Syndrome (GAP Syndrome or GAPS) is a condition, which establishes a connection between the functions of the digestive system and the brain. This term was created by Dr Natasha Campbell-McBride, MD, MMedSci (neurology), MMedSci (human nutrition) in 2004 after working with hundreds of children and adults with neurological and psychiatric conditions, such as autistic spectrum disorders, attention deficit hyperactivity disorder (ADHD/ADD), schizophrenia, dyslexia, dyspraxia, depression, obsessive –compulsive disorder, bi-polar disorder and other neuro-psychological and psychiatric problems.

The GAPS diet is based on the SCD (the Specific Carbohydrate Diet). SCD has been invented by a renowned American pediatrician Dr. Sidney Valentine Haas in the first half of the 20th century. Dr. Haas and his colleagues have spent many years researching the effects of diet on celiac disease and other digestive disorders. The results of this research were published in a comprehensive medical textbook “The Management of Celiac Disease”, written by Dr. Sidney V. Haas and Merrill P. Haas in 1951. The diet, described in the book, was accepted by the medical community all over the world as a cure for celiac disease and Dr. Sidney V. Haas was honored for his pioneer work in the field of pediatrics. Unfortunately, when celiac disease was defined as a gluten intolerance or gluten enteropathy, the SCD got forgotten as outdated information. It was brought back to life by Elaine Gottschall. Following the success of the SCD with her daughter, Elaine Gottschall over the years helped thousands of people, suffering from Crohn’s disease, ulcerative colitis, celiac disease, diverticulitis and various types of chronic diarrhea. But the most dramatic and fast recoveries she reported in young children, who apart from digestive problems had serious behavioural abnormalities, such as autism, hyperactivity and night terrors. She devoted years of research into biochemical and biological basis of the diet and published a book, called “Breaking the Vicious Cycle. Intestinal Health Trough Diet.”

Dr. Keith is a Certified GAPS provider. He is familiar with the GAPs diet and has guided many patients through the GAPs protocol. He is available for phone consultation and email correspondence if distance is a problem.